As I study The Oxygen Advantage book I will share some insights and exercises with you from it.

From Chapter 2, some explanation of why you may be experiencing heavy breathing during what should be moderate exercise.

When your breathing receptors have a strong response to carbon dioxide and reduced pressure of oxygen in the blood, your breathing will be intense and heavy. Your body will have to work much harder to maintain this increased breathing volume, but because over-breathing causes carbon dioxide levels to drop, less oxygen will be delivered to working muscles.

Conversely, having a greater tolerance to carbon dioxide not only reduces breathlessness but also allows for much more effective delivery of oxygen to your working muscles during exercise. When breathing receptors are less sensitive to carbon dioxide levels, you will experience a reduction in breathlessness as your body is able to work harder with far less effort; breathing will be lighter during both rest and physical exercise. p.33

It appears that for breathless athletes, our problem is not about getting more oxygen (more frequent and bigger inhalations during swimming) but to train the body to handle higher levels of CO2 and lower levels of O2 in the blood. Through certain kinds of training we can lower our sensitivity to this, which not only lowers the discomfort, it actually lowers our body’s response to that condition, so we just don’t feel the need to breathe as heavy.

It has been said that one of the main differences between endurance athletes and non-athletes is their response to low pressures of oxygen (hypoxia) and higher levels of carbon dioxide (hypercapnia). In other words, endurance athletes are able to tolerate a greater concentration of carbon dioxide and lower concentration of oxygen in the blood during exercise.

So, how bad is you situation really?

It would be disingenuous to expect breathing to be efficient during sport if breathing during times of rest is inefficient. p.36 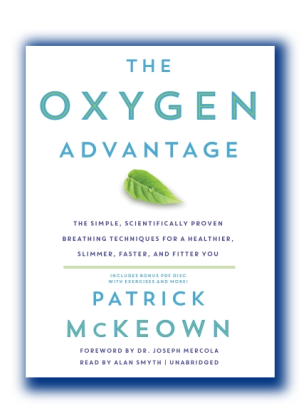 Here is the main test that gives us the measurement that all subsequent choices for breath training are based on.

As far back as 1975, researchers noted that they length of time of a comfortable breath hold served as a simple test to determine relative breathing volume during rest and breathlessness during physical exercise. The Body Oxygen Level Test (BOLT) is a very useful and accurate tool for determining this relative breathing volume. BOLT is simple, safe, involves no sophisticated equipment, and can be applied at any time. p.37

The most accurate BOLT score is taken first thing after waking. p. 47

Instructions for taking the BOLT Test

What do the numbers mean?

… a problem arises when a BOLT score is less than 20 seconds, as excessive breathing will eliminate more carbon dioxide than the amount that is produced through exercise, leading to a net loss of CO2, reduced oxygen delivery, and constriction of blood vessels and airways.

… the vast majority of individuals, including athletes, have a comfortable breath-hold time of about 20 seconds, often less. p.40

The ideal BOLT score for a healthy individual is 40 seconds, and according to the book, this is a reasonable goal for most people, when following The Oxygen Advantage program. During the TOA training, in every 5-second increase in your BOLT score you should experience noticeable improvements in how you feel resting and in exercise.

BOLT score of 10 or less

This site uses Akismet to reduce spam. Learn how your comment data is processed.

© 2009 – 2019, Mediterra International, LLC. All rights reserved. You are permitted to copy this material for your own personal use provided that full and clear credit is given to Mediterra International, LLC and Mediterraswim.com with appropriate and specific direction to the original content. Unauthorized use and/or duplication of this material without express and written permission from this site’s author and/or owner is prohibited.