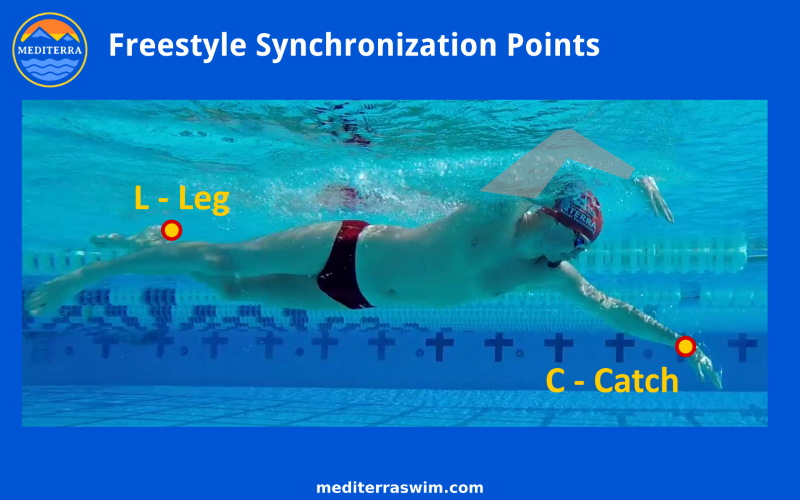 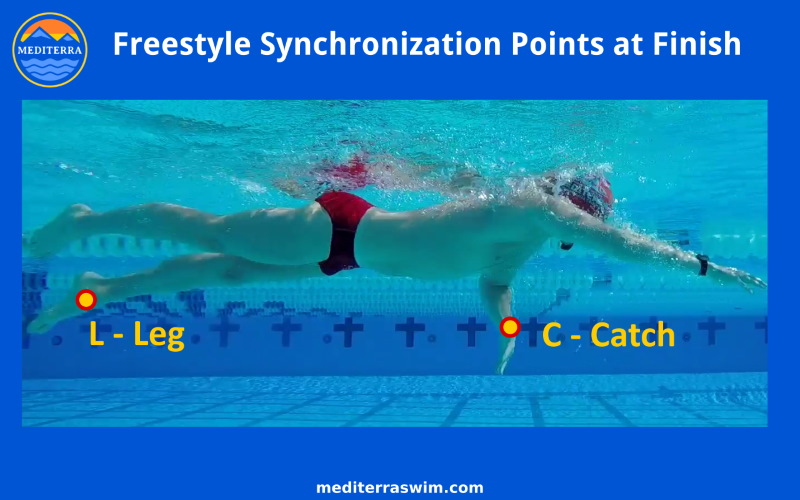 The leg will come down to its finish position as the catch is moving through its phase.

Just as you practiced pressing the leg more slowly, with a steady pressure to match the torso rotation, aim to match the pressure and rate of speed of the catch also. The more closely these two are matched and kept proportional in speed, the more the press of the leg can assist that catch, the more you can feel it assisting.  The leg will move faster and get to its finish position before the catch finishes, but aim to make that press last longer.

This can be particularly useful and encouraging when you are starting to feel muscle fatigue in the catch, yet are pushing yourself to maintain steady SPL and/or tempo. Focusing on the connection between the leg and the catch can help ‘lighten the load’ on that catch action, enabling you to persist at the same effort a bit longer.

Keep a close eye on the shape and pathway of your catch so that you are maintaining your best grip on the water. The better your catch the more you will feel the press contributing toward making it easier. 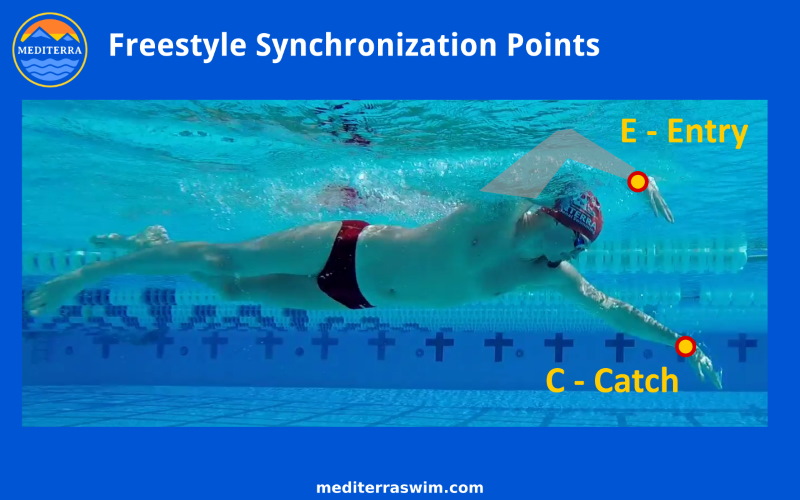 There is an ideal timing for the switch of the arms in front of the body. In the image above you can see the entry hand (E) piercing the water just across from the elbow of the lead arm. This is about the ideal moment for the arms to switch positions. Now the lead arm can begin the catch (C).

Just before this moment, the lead arm continues to extend forward while waiting for the recovery arm to come fully forward. Note that the lead arm is not passively hanging there – that side of the body is actively stretching the whole time. The streamline side of the body feels long and firm and getting longer.

There is some small room for adjustment depending on the tempo, but in general the ideal timing is to have the catch begin at the moment the entry hand has entered the water. For slower tempos your entry arm might be submerged to past the watch band by the time you set the catch, and for faster tempos your fingers may just start to pierce the water at the time you set the catch. But to switch earlier than this, or later than this is going to introduce greater ‘power leaks into your stroke.

Another way to phrase this is ‘arm overlap’. Notice how far the entry arm overlaps the lead arm in about the ideal amount. If you have too little overlap, or too much overlap at the moment the arms switch, then the catch is not able to connect with the full torso rotation, and ‘power leaks’ from the propulsive action. When there is just the right amount of overlap, then you are able to transfer force from the catch side to the entry side of the body instantaneously, and smoothly. Timing both sides with the full torso rotation is the key.

At the moment your entry hand is piercing the water, your torso begins to rotate. The ideal is to connect the catch to the start of this torso rotation also. Notice how all three must happen together.

Imagine a steel cable tying the catch wrist to the entry wrist. This cable passed through the shoulders. When one wrist moves the other must move in immediate response to it, in one smooth motion. The shoulder connect the two arms. When you set the catch on one side and start to press against the water, you instantly transfer that force – through that imaginary steel cable – into the entry arm. The entry arm slides down and then extends forward, receiving the force from the catch side of the body. This is how you generate and feel acceleration on each stroke. This is where the magic begins.

First, in slower motion strokes, establish the ideal timing, or ‘overlap’ position and get very familiar with this.

To make the ideal zone more distinct in your nervous system, occasionally try too much overlap, and too little overlap in order to feel how those distortions cause your stroke to feel less connected, less effective. Notice how you get less acceleration.

Gradually speed up the tempo while maintaining this same ideal overlap. Eventually, you should be able to keep proper switch timing at every tempo you train with, from slow to sprint tempos.

Remember that the motion of the two arms, entry and catch sides, through the shoulders, should feel firmly connected to each other. You are aiming for a immediate, smooth transfer of force from one side of the body to the other, that gives you a sense of acceleration on each stroke.

The better the catch shape and pathway, the more force you generate that is available to be transferred to the other side.

The better your streamline position, the farther your body is able to slide forward once it receives that force.

The better your arm switch timing (the amount of overlap), the more of that force is transferred to the other side.

Practice Set for Catch and Hold

Choose 2 or 3 of the cues above to work with today.

Do one set of repeats for the left side and then one set for the right side.

Lesson for Catch and Hold

Skills for Catch and Hold

In this lesson you will work through a series of drills to help you:

The cues below will help you create and improve these three features in your catch action.

Drills for Catch and Hold

Cues for Catch and Hold

The entry and extending arm is the main actor, while the catch arm is the supporting actor. Set a good catch and then focus upon transferring force across the body, forward, into your best Streamline Position. The better your Entry, Extension and Streamline, the farther you will slide forward on each stroke!

Intro to Catch and Hold

In conventional swimming, the underwater part of the freestyle stroke is called the pull (or pull/push) phase because in that tradition, the emphasis of the whole stroke is about pulling on the water to move the body forward. We prefer to call it the ‘catch and hold’ phase because our orientation is about holding a point in the water and sliding the body forward, past that point. Our emphasis is on the body moving forward, not on pushing water backward. In this view, the main emphasis of the stroke is to Generate Forward Momentum delivered into the Streamline side of the body, while the catch is in a supporting role. 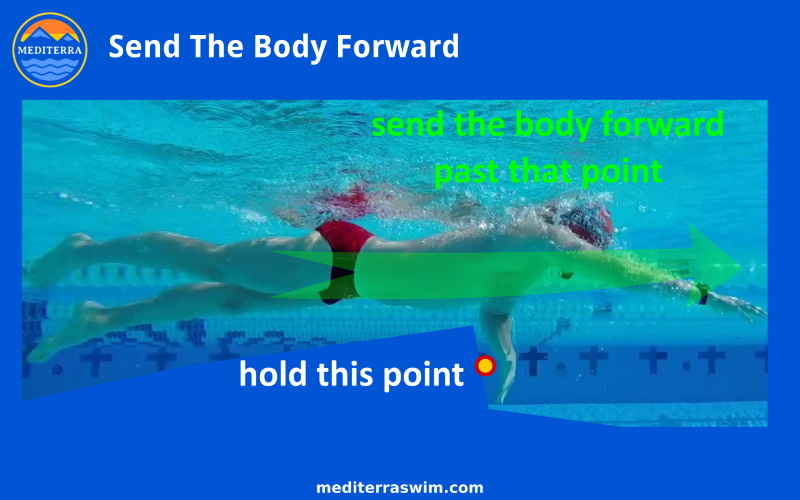 We have waited until the Freestyle Advanced series to present this skill because the Catch and Hold is meant to serve what the body is doing in those fundamental skills. Those skills need to be in place so that the Catch and Hold can have the intended effect.

Explaining the Catch and Hold

As noted above, the Catch and Hold does not work well apart from its coordination with other parts of the stroke. When the catch is connected to the torso rotation, the force of that catch can be transferred into the torso. When the torso is connected to the entry and extension arm, that force can be transferred into that side of the body, producing better forward motion. All three need to be tied together in a smooth choreography, and when they are, you feel a wonderful acceleration in each stroke.

In the Generate Forward Momentum lesson you developed the First Connections, which includes the optimal arm switch timing – this timing is necessary in order to transfer that force from the catch side to the entry/extension side of the body, through the torso rotation. If the timing of the arm switch timing is too late or too early, then less of that force can be transferred from one side to the other.

This effective forward propulsion depends on the three components each doing their part and being well-synchronized with the others:

In the Catch and Hold lesson you are learning to form a more effective catch to generate more force, then connect that to the torso to transfer that force from one side of the body to the other, and connect that to the entry actions to transform this into forward motion.

Skills for Catch and Hold

The better you perform the catch and hold, the bigger the wave of force you may transmit to the other side of the body.

The quality of this wave depends on:

The cues below will help you create and improve these three features in your catch action.

Creating the wave with an arm is not enough – it must be tied into the torso rotation so that the torso is doing most of the work of holding the water, which mean it is transferring that force from the catch side to the streamline side of the body. So, the lesson starts with a focus on only the catch arm and torso, and eventually adds the other side of the body, completing the full choreography.

In this lesson you will work through a series of drills to help you:

Useful Imagery For Catch and Hold

During the lesson you will likely be given these images/analogies to work with:

Another way of viewing it, is that you press and send this ball of water under your body, and your body rides over the top. More specifically, you create a layer of pressurized water and slide your hip and leg over the top, helping them stay up near the surface. 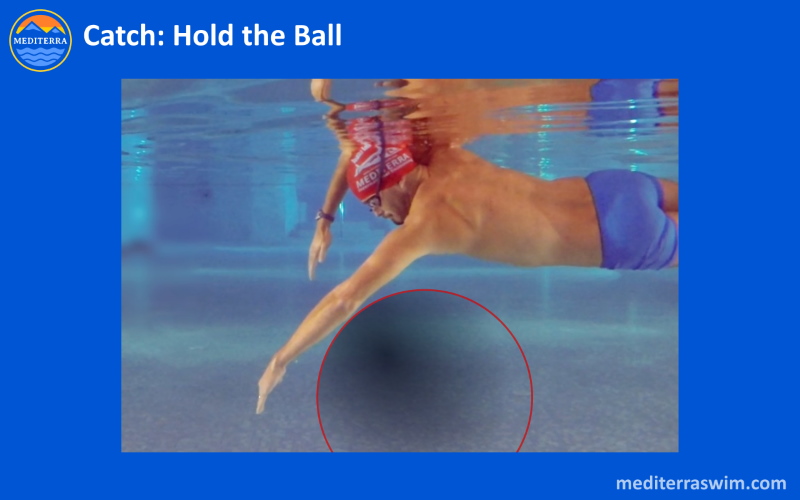 The ladder gives you a directional grid, it gives you fixed locations in the water, to set the position and trajectory of your movements.

The two rails correspond to your two arm tracks. Your lead arm extends forward on that rail, while your catch hand holds a fixed point – a rung – on the rail. The rungs represent the point ahead where you set your catch (get a grip on the water). 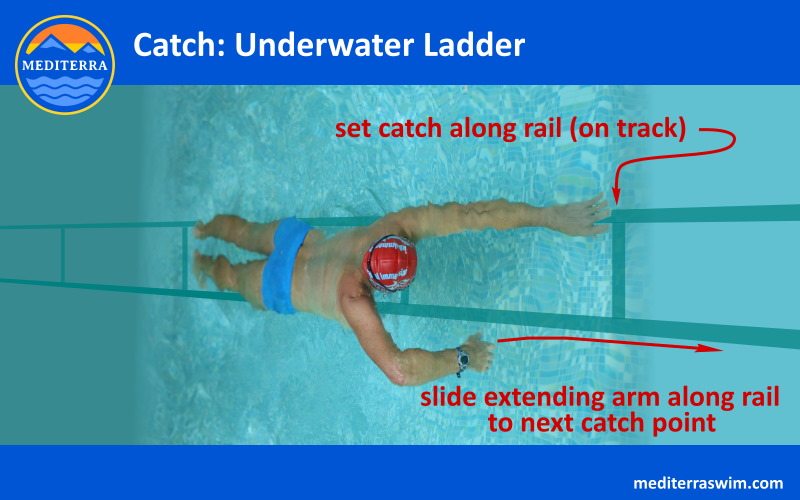 Imagine if there really was a ladder in the water underneath you. Imagine reaching ahead, getting a grip on a rung, and then pulling on it in order to slide your whole body forward past that rung. Your pulling hand would be fixed – it would not slide to the side or up/down. It would stay at the same depth, on the same track, while the body rotated around it, smoothly sliding forward, up the ladder, with your lead arm reaching for the next rung. Likewise, your body would not be sliding to the side or up/down, but stay parallel to the surface and to the ladder, simply sliding forward in the opposite direction of your pull.