What is a Tempo Pyramid Set?

A tempo pyramid is a special kind of practice set, using a Tempo Trainer and timing the stroke movement to coincide with the BEEP on the Tempo Trainer.

A Tempo Pyramid set is intended to help your brain discover ways to lengthen the stroke without slowing your speed to do it.

You will start with an assigned tempo (TS), or you may choose one near the middle of your comfortable tempo (TC) range. You count strokes on every length.

There will be a series of repeats, usually like 2x 25 or 2x 50. At each new step in the series you will change the tempo on the Tempo Trainer by the amount indicated in the practice instructions.

It is called a ‘pyramid’ because of the way we might graph the changes in tempo, during the set.

In this example above, the swimmer starts with tempo 1.20 and swims 2x 25. On each next step she slows the tempo by +0.10 seconds and swims another 2x 25. She repeats this process for 5 steps, until arriving at tempo 1.60. On the way ‘up’ she is looking for ways to lengthen her stroke since she a little more more time per stroke on each next step. She wants to reduce her stroke count (SPL).

Then she begins working her way back down, swimming 2x 25 on each step, by increasing the tempo by -0.05 seconds on each step. These are half-steps (0.05 is half of 0.10 seconds), and this gives her brain more time to adapt as tempo increases. On the way ‘down’ she is looking to preserve as much of that longer stroke (lower stroke count, or lower SPL) even through tempo is gradually increasing. 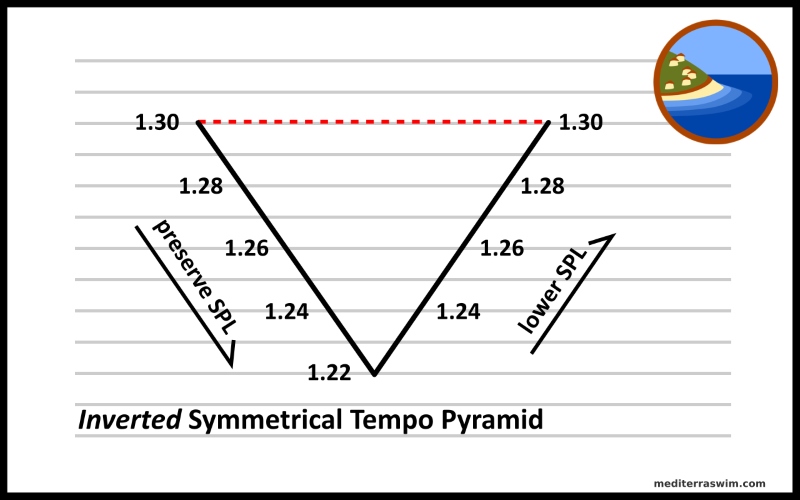 The main point of tempo pyramids is to trick the body and brain into discovering ways to lengthen and protect stroke length even though tempo is changing. The key to these sets is concentration on precise body position and movements, while relaxing all other parts of the body more deeply.